Walk:
From Molinaseca the walk takes roughly 1.5 hours. The Camino splits in two shortly after leaving Molinaseca. The right goes along a road and the left is slightly more scenic but also a bit longer. Each route includes numerous places to stop and get breakfast or cafe con leche. In order to enter the city you must cross a bridge.

Originally built by the Celts, the Castillo de low Templarios was expanded by the Romans, Templars, and Spanish land owners across seven centuries. The original towers mimic constellations, and the castle has one and two lines of fortifications with the Sil River bordering one side. The Poor Fellow-Soldiers of Christ and of the Temple of Solomon, more commonly called the Templars, took control of the castle in 1211 after Alfonso IX granted it to them. They expand d it to protest pilgrims walking the Camino. The castle currently sits along the stretch of the Camino passing through Ponferrada. The castle now contains roughly 1400 books in its Templar library. From the outside the Castle looms over the area around it, and serves as a fantastic back drop for pictures or a picnic. Unfortunately the inside does not live up to the outside. The structure seen from the street and the structure of the inside are hugely similar. The Castle is also closed on Mondays; look up the hours of any place you plan on visiting before you try to go there. 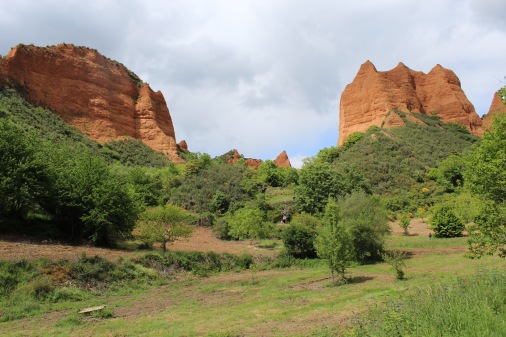 Las Medulas is a UNESCO heritage site and the best preserved mine from the Roman Empire. It was built in 1AD and was operated for approximately 250 years, during which 1.65 million kg of gold was extracted by 60,000 slaves per year. The hydraulic mining methods used by the Romans created a stark geologic contrast between the surrounding lush green mountaintops and the red tinted, jagged, and bare bedrock of the Las Medulas mines. This long-term environmental scarring was facillitated through the use of aqueducts, which supplied the water necessary for breaking down bedrock to reveal gold. The mine is about 25km from Ponferrada; only a thirty minute bus ride away. The ride is scenic although slightly nauseating due to the winding mountain pass and elevation. The first destination includes a lovely walk, which allows for leisurely exploration of the red tinged mines and tunnels. There are numerous paths and possibilities for adventurous exploration, if visitors are so inclined. It is strongly suggested that visitors wear boots, bring water, snacks, and a camera to capture the panoramic views. The second recommended destination includes an extra ten minute bus ride to the Mirador, one of the most spectacular views available in Northern Spain.

There was an error retrieving images from Instagram. An attempt will be remade in a few minutes.